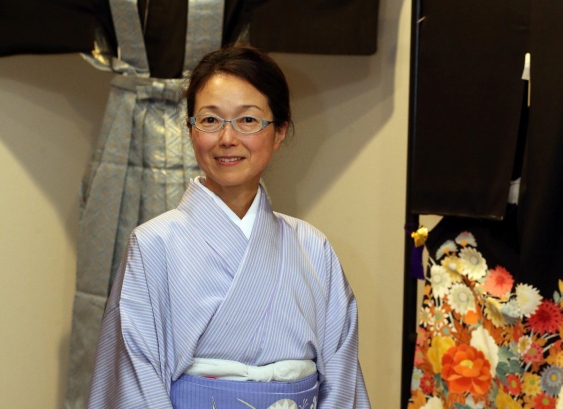 At the Art Gallery of Greater Victoria, I met Hitomi Harama, curator of one of two shows that introduce the traditional Japanese culture of the costume. She was dressed in a neat kimono in soft blue silk, her car keys tucked into the gentle folds within her morning glory-blue obi. As a fashion statement, this is far more interesting than what was being worn by most visitors to the gallery.

Japanese traditional dress is basically a simple form made from woven lengths of fabric, not “tailored” or cut into curved shapes. The texture of the weave, its colour and the designs woven, dyed and embroidered into it are considered with a sensitivity to season and social context far beyond anything western clothing has achieved. It is a sublimely elegant costume that harmonizes with the interior spaces unique to Japan. With a certain way of walking, of kneeling on the tatami, of gesturing with sleeves, kimono culture is a world of its own.

The first of the two shows is titled From Geisha to Diva and presents an element of the gallery’s renowned Japanese collection, now returned after a decade touring the continent to rave reviews. It is based on the costumes of Ichimaru (1906-1997), a Japanese phenomenon. Born a poor country girl, as a child she was essentially sold into the geisha world where she was noted for her fine voice. With the rise of phonograph recordings, she came to embody the soul of Japanese folk music. During and after the Second World War, she spoke for the national spirit of that beleaguered nation, and with television she reached an unprecedented audience.

Through her friend Fumi Suzuki and Yoshiko Karasawa of Vancouver, the costumes of Ichimaru and much else — her hair ornaments, her wig and dressing table, a collection of photographs — were given to the gallery and are now handsomely installed. It is a unique, personal collection of exquisite design and colour.

A visit to Ichimaru’s wardrobe is greatly enhanced by the parallel exhibition featuring some of the collection of Harama. This exhibition was specially chosen to introduce the code of kimono fashion, the “rules” of this enchanting preoccupation in which style-conscious Japanese women have long engaged. Harama moved here from Nagoya, where her family, on both mother’s and father’s side, have owned kimono shops for generations. In Victoria, as Ume Silk Kimono Couturier, she is dedicated to sharing kimono culture (umesilkkimono.com).

To the uninitiated, kimono means either a yukata — the simple cotton robe — or geisha wear — the over-elaborate and rather antiquated working clothes of an entertainer. These two ends of the spectrum miss the vast mid-range of everyday stylishness of well-dressed women. While those not used to wearing kimono might find them tight or constricting, the ease and comfort of Harama’s deportment belies those notions. With her help, I began to understand the world of kimono culture.

A kimono shop has no ready-made clothes on racks but provides shelves and shelves of fabric in uniform bolts. These widths are cut into a few standard lengths and sewn along the edges to a common shape. Most are silk, and for occasional laundering can be disassembled, washed and stretched, and then resewn. Some materials are dyed in patterns before weaving (kasuri), some are woven with slightly raised patterns, and others have a gauzy texture to let the summer breezes blow through. The subtlety of these textiles might go unnoticed beneath the added décor of colour and pattern.

Japanese sensitivity to colour is far beyond what our fashionistas offer us. Each of the many seasons of the year has its traditional combinations. Beyond that, the kimono couturier helps choose linings, slightly visible at the front hem, which continue the effect. The kimono is held at the waist with a wide belt called an obi, chosen to contrast or complement a kimono in a way which is sometimes sheer poetry. The crowning glory of the kimono involves the patterns that are painted and sometimes embroidered on the silk.

The most sober and formal dress is black, with a motif restricted to a trailing hem. On show is one with stylized waves washing around the wearer’s ankles. A more festive model, hand-painted in dyes over a rice-paste resist, has a gorgeous flower cart covering the lower half. For younger and more flamboyant women, stunning all-over designs play in joyous asymmetry which, when worn, wrap the figure in a dynamic arabesque of colour, pattern and imagery.

Kimono culture is always concerned with nature, seasons, and a symbolic language that bespeaks a long tradition. Flowers, good-luck symbols and much else may be ingeniously drawn and then dyed onto the bolt of fabric. A dimensional effect is discreetly brought out by gold foil or thread, and the repertoire of technique is endless.

The Japanese climate, with hot, humid summers, is hard on textiles and those on display are not antiques. In fact, I was surprised when Harama told me that the 1980s were the summit of kimono technique. Earlier, during the war years, the traditions had survived but the materials were poor. When Japan became an economic powerhouse in the 1980s, the kimono cloth and patterns became sumptuous, gorgeous, even decadent. Since then, with fewer women wearing traditional clothing and synthetic fibres displacing the silks, those glory days are past.

Please come and enjoy the two shows, and the many events planned at the gallery that will bring them to life. These days, when so much that passes for art reflects neither skill nor tradition, the depth of a living culture embodied in these kimonos shows an artistry far beyond simple craftsmanship.

Hitomi Harama is the curator of one of two parallel exhibitions at the Art Gallery of Greater Victoria on the history and beauty of Japanese kimonos. Photograph by Bruce Stotesbury, Times Colonist

Here’s a sample of the works on display at the Art Gallery of Greater Victoria. Photograph by Bruce Stotesbury, Times Colonist