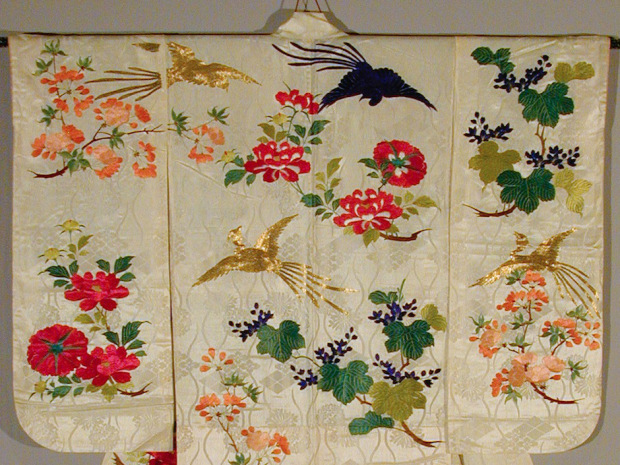 The enduring appeal of a kimono seemingly lies in its elegant cut and drape. The traditional Japanese garment has remained in its basic form for hundreds of years, it comes as no surprise that it was an inspiration for spring designers. Witness Riccardo Tisci’s kimono-tuxedo jackets wrapped in intricate obi-style belts at Givenchy, and the wisteria embroidery on the floor-sweeping sleeves of a white L’Wren Scott gown. The latter alludes to the kimono’s true power: its surface meaning.

As the Textile Museum of Canada’s upcoming upcoming “From Geisha to Diva: The Kimonos of Ichimaru” exhibition attests, decoding and interpreting the delicate details of a kimono’s colour and print can imply a lot about its wearer. Deemed one of the 20th century’s most famous geisha, Ichimaru was a demure symbol of Japanese femininity steeped in the traditional. “In general, you would be able to look at any geisha and their kimono and understand their age and class and gender,” Shauna McCabe, executive director of the Textile Museum of Canada, explains. “But in her case, it had another role to play — it was responding to her stories and her experiences.”

The back of one particular homongi (a common style of kimono worn for semiformal visits and events) depicts the black silhouette of a bridge and riverbank. The branches of a willow tree adorn the kimono’s shoulders, with flowing waters filling the bottom hem. The idyllic scene references Yanagibashi (Willow Bridge), the Tokyo pleasure quarter where Ichimaru originally plied her musical talents. Like most geisha, poverty forced Ichimaru to leave home in her early teens to work as a low-ranking geisha. Determined to cultivate her artistic talents, Ichimaru moved to Tokyo in the mid-1920s, where she cultivated a reputation for her nightingale voice and shamisen guitar.

“There are many physical and cultural elements that are worth carrying over to a modern life,” says Harama. “Handing over kimono and its culture is something I am very interested in.” Hitomi Harama, a Kimono specialist.

Another Ichimaru homongi shows a clothesline of kimonos, suspended and twirling in a breeze and decorated with rainbow-embroidered spring fauna, like iris and water flowers. The Japanese characters meaning “spring wind” are splashed near the front opening, referencing a verse from Ichimaru’s first hit, the 1933 theme song to the movie Nure Tsubame (Wet Swallow). After signing an exclusive contract with Victor Recording Company in the early 1930s, Ichimaru soon quit the geishahood for a career in traditional folk music. Adept at adapting to the changing medium, Ichimaru easily transitioned from a popular 1950s radio star to a frequent Japanese television guest from the 1960s well into the 1980s.

When Ichimaru died in 1997, her confidant, Dr. Fumi Suzuki was trusted to find a home for her kimono collection. Suzuki got in touch with Yoshiko Karasawa, the renowned Vancouver philanthropist. With her husband Michael Audain, Karasawa maintains one of the most significant private collections of British Columbian art and she in turn reached out to the Art Gallery of Greater Victoria. “Immediately, I saw the potential for it, because geishas are always very romantic subject matter,” recalled Barry Till, the gallery’s curator of Asian Art. In the 17th century, the geisha was heralded as an idealized pin-up in the era’s woodblock prints and her intricately detailed kimonos were frequently knocked off by the low chōnin caste of merchants, craftsmen and artisans. “They were the supermodels of their own time,” confirms Till. “Of course, now they’re very old-fashioned and nobody’s as interested in them as in the old days, but they were so well-versed in music, poetry, calligraphy, dancing, playing musical instruments, conversation, etiquette … it was a status symbol to be seen with one of these women. They were the best you could get. It was like being seen with someone famous.”

Even after Ichimaru was no longer a geisha, she painstakingly dressed for the part all her life. This performance wardrobe — tailored for the bright lights of stage or television — was largely seen by its audience as a relic from the past. During the country’s war with the United States in the 1940s, a black market for kimonos flourished, and treasured family kimonos were traded in the countryside for rice or cigarettes. The struggle during the postwar years saw the wholehearted embrace of American style, and the kimono became expensive ceremonial dress only seen at weddings or coming-of-age ceremonies. And, as the Japan Times has said, “this association with formality has tightened the rules and conventions involved, putting many Japanese off wearing kimono casually for fear of making a sartorial mistake.”

When the first exhibition of Ichimaru’s kimonos was mounted in 2001, it arrived amidst a geisha boom in the Western world. At the time, Arthur Golden’s potboiler Memoirs of a Geisha had sold four million copies in the United States and was soon to be a feature film, bringing the geisha back into mainstream culture, albeit via a heavily-criticized fictional treatment. (One particularly obsessed reader was Madonna, who wore a red vinyl Jean-Paul Gaultier kimono in her 1999 “Nothing Really Matters”music video.) The exhibition benefited from this interest: it toured extensively, with stops at the prestigious National Geographic Society Museum in Washington and the Asian Art Museum in San Francisco. “I think we’re probably the only museum with a large collection of geisha kimono in North America,” explains Till, alluding to the difficulties a cultural institution faces in acquiring a geisha’s kimono collection due their strict rules of confidentiality, not to mention the tendency for these valuable textiles to remain in Japan.

While a museum has at their disposal temperature-controlled rooms and the expertise of a conservator staff, most families lack the time or even know-how to maintain these fragile silks. “If it’s abandoned, it’s mainly because there’s no interest. They don’t care or need it, and not everyone’s house is so big. Rather than keep it in storage, they just want to throw it away,” explains Hitomi Harama, a kimono specialist in Victoria.

Yet Harama, whose family has operated Owmiya, a Nagoya-based high-end kimono business for over 85 years, is seeing a change in Japan. In the past ten years, vintage kimonos have become popular. “These days, young people just wear it casually.” Meanwhile, the appetite for contemporary kimono fashion “mooks” (magazines-meet-books) like Kimono Hime grows; its pages advise a youthful readership on how to customize vintage kimono for everyday wear, and on inexpensive shopping tips.

When the “From Geisha to Diva” exhibition returns to the Art Gallery of Greater Victoria this summer, Harama will be showing alongside a collection of her own family’s 20th century kimono. “There are many physical and cultural elements that are worth carrying over to a modern life,” says Harama. “Handing over kimono and its culture is something I am very interested in.”

The exhibition opens at the Textile Museum of Canada in Toronto on January 29, through April 11, 2014